Reaction rules were generated using the procedure outlined below: 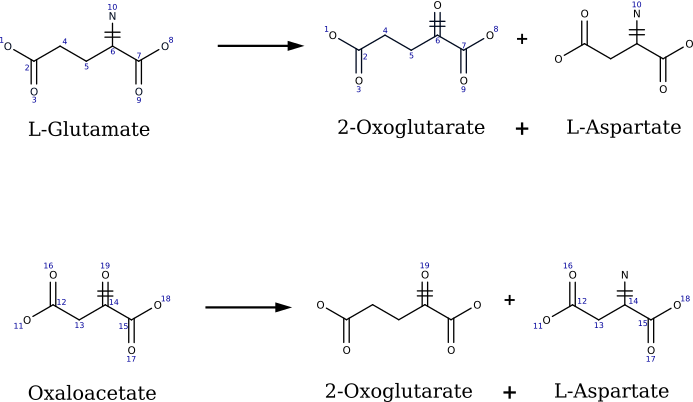 An in depth description and validation of the generation process are described in Delépine et al., 2018.

Reaction rules are scored based on enzyme sequence availability, allowing prospective assessment and ranking of pathways.

Scores associated to reaction rules should be regarded a penalty score: a penalty score of 0 is the best possible value, while a higher penalty (>0) implies a decrease in the certainty of sequence availability.

More details on the score computation and investigation are described in Delépine et al., 2018.

Data used in RetroRules are available as a SQLite file. Figure below depict the SQL schema in used by RetroRules.

At the center of the schema is the rules table that contains the information to uniquely describe a reaction rule from a mono-component reaction, where one rule is associated with a given substrate from a given reaction at a given diameter. However each rule can have multiple products, described in the rule_products table. The SMARTS and SMILES description of these rules can be found in the smarts and smiles tables respectively since a given SMARTS or SMILES description of a rule can apply to multiple reactions, substrates and diameters. The rest of the tables are meta-informations extracted from source databases. For more information feel free to contact us.

The online rule generator allows one to generated custom rules using a reaction SMILES depiction or a RXN MDL file describing the reaction template to be used.

The same procedure than described in the "Reaction rules generation" section is used to generate the rules, with 2 exceptions. First, all structures of the inputed reaction are considered as primary compounds, i.e. no filtering will be attempted to remove cofactors. We believe that the role importance of each structure involved in a reaction is up to the user. To help in this, the second difference is that the custom rule generator allows the use of unbalanced reactions, i.e. reaction where the number of atoms different between left and right hand sides.

See here for technical documentation and examples on the REST API.